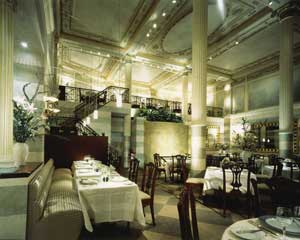 Master Chef Erik Blauberg, best known for his culinary prowess at popular restaurants such as Manhattan’s ’21’ Club, the former restaurant Colors, and American Renaissance, as well as Jalousie Plantation Resort in the Caribbean, is making waves as a restaurant specialist with his business, EKB Restaurant Consulting. In today’s economy especially, Blauberg’s expertise is frequently called upon to overhaul major food programs, design state-of-the-art gourmet kitchens in pre-existing and new establishments, for menu engineering and cost control implementation and to employ proper service procedures and customer relation practices, among other ‘turnaround’ services. One of his focuses, restaurant fixing, is similar to the concept popularized by Gordon Ramsay’s “Kitchen Nightmares,” a hit television show both in the UK and the US where Ramsay steps into troubled kitchens to turn things around, Blauberg’s restaurant fixing capabilities is a hands-on, strategic approach to help both struggling and successful restaurants streamline their productivity to help increase overall revenue.

Blauberg was recently called upon by Crain’s NY Business to comment on how restaurants are instituting prix fixe menus to offset the falling economy, “if your menus aren’t engineered correctly, you’ll lose money,” he says. In a separate article, Blauberg goes on to say, “the discounting has gone to another level, and it’s not over yet.” As the ominous economy attempts to take hold of the restaurant industry, prix fixe menus, wine specials, discounted meals and other promotions are quickly becoming the norm and as an expert on troubleshooting this situation, Blauberg’s advice has also been captured recently on FOX-5 NY and on an international level, as seen in Germany’s leading economic commercial newspaper, Handelsblatt.

In existence only a few short years, EKB Restaurant Consulting has been retained by a diverse set of clients, often anonymously, ranging from well-known entities to small mom-and-pop shops, to help increase overall productivity and customer satisfaction. And with the current economic crisis underway, Blauberg’s expertise is needed now more than ever. The creation of successful restaurants is dependent upon the integration of several key factors. These include the delivery of excellent food and service on a consistent basis in a unique and welcoming environment, tightly supervised cost controls, as well as a public relations program.

As seen in Nation’s Restaurant News and their new “Independent Thinking” blog, aimed at independent restaurateurs, some of the most common mistakes that manage to cripple many restaurants, Blauberg claims, are as follows: undercapitalization, unrealistic sales expectations, staffing issues, lack of team effort, menu engineering, insufficient restaurant training, restaurant concept, uncontrolled cost purchasing and receiving, lack of quality and consistency and lack of willingness to fix the ongoing problem.

“Chefs and restaurant owners should not be intimidated or even ashamed in enlisting my help for their business. It often takes an objective eye to really see the problem and be able to offer a solution and that is where my expertise on achieving an optimal kitchen and business operation come into play,” said Blauberg. “At the end of the day, once profits start to rise and business increases, my services pay for themselves.” EKB Restaurant Consulting is based in New York City; however, Blauberg’s extensive knowledge of the inner mechanics of the restaurant business can be applied in any venue, making his restaurant enhancing capabilities attainable across the globe.