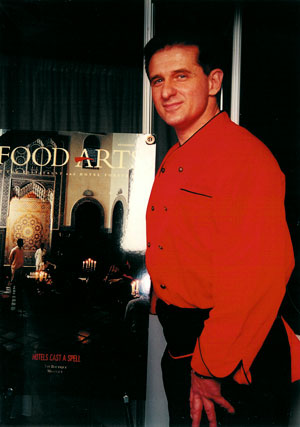 With more than 20 years of experience, renowned culinary expert Erik Blauberg is known around the globe as a master chef and first-class restaurant consultant. He has brought his considerable talent and expertise to such acclaimed eateries as Manhattan’s famed 21 Club, Colors, American Renaissance, the Ritz in London and the Beverly Wilshire Hotel in Beverly Hills.

He can be seen on The Food Network, The Discovery Channel, ABC, NBC, FOX, CBS and MSNBC, and he has made numerous guest appearances on the CBS Morning News, The Today Show, The Late Show with David Letterman and Live with Regis and Kelly.

As the founder of EB WorldWide Hospitality Consulting, Blauberg creates food programs and raises service standards for venues around the world. He is recognized for his ability to understand and help restaurants respond to economic, dietary and industry trends.

Blauberg’s professional accolades include being named “one of the world’s great chefs” in the Culinary Institute of America’s Great Chef series, serving as executive chef for the 12th Annual James Beard Holiday Auction, earning the Special Achievement Jay Walman Award, and receiving four stars from Forbes magazine eight years in a row. The Academy of Hospitality Sciences named him one of the world’s best chefs and presented him with its prestigious Five Diamond Award. Food critic John Mariani, famed food columnist and author, named Chef Blauberg one of the top 10 chefs in New York City.

His education in the culinary arts came the old-fashioned way, by working alongside some of the most celebrated chefs in the world, in regions including the US, France, England, Switzerland, Austria, Italy and Japan. He traveled to the French kitchens of Paul Bocuse and Roger Verge, the Imperial Hotel in Tokyo, Kicho in Osaka, and to the Restaurant Freddy Girardet in Switzerland. In New York, he sharpened his culinary skills at Bouley, La Cote Basque, Windows on the World and Tavern on the Green.

Blauberg has contributed to countless cookbooks and recently joined other prominent chefs Jean-Georges Vongerichten, Thomas Keller and Charlie Trotter, as a contributor to the vegan-inspired cookbook, “The Great Chefs Cook Vegan.”